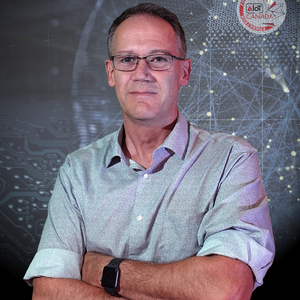 After studying in France, Mr. Breyel obtained a diploma in network and telecommunications engineering and worked as a consultant for a few years in Paris. In 1993, he decided to immigrate to Canada, where he co-founded five years later Claridion, a company that specializes in the remote monitoring of critical technological environments. 20 years later, Claridion has transformed to become one of the few companies dedicated to Data Center Infrastructure Management, or DCIM, a specialization that integrates energy monitoring and analysis of data generated by electromechanical environments and physical spaces hosting IT equipment. As a beginning for the use of Artificial Intelligence, he then perceived the potential of several socalled “disruptive” technologies and was more particularly interested in the IoT (Internet of Things) field of activity. In early 2018, he began an exhaustive analysis of the IoT market in Canada. Within a new Reference Framework which he will call IoT3 (IoT Cube), he models the different technological architectures and the numerous fields of use while documenting the best practices in the implementation and operation of IoT technologies. In order to structure the delivery ecosystem, he launched the idea of a new and neutral organization which would later become “AIoT Canada” which he chairs today with the help of a fantastic board of directors. As a strategic consultant, he now offers innovative companies the strategic and operational support they need to ensure the success of their digital transformation.

In the spirit of respect, reciprocity and truth, we honour and acknowledge Moh’kinsstis, and the traditional Treaty 7 territory and oral practices of the Blackfoot confederacy: Siksika, Kainai, Piikani, as well as the Îyâxe Nakoda and Tsuut’ina nations. We acknowledge that this territory is home to the Métis Nation of Alberta, Region 3 within the historical Northwest Métis homeland. Finally, we acknowledge all Nations – Indigenous and non – who live, work and play on this land, and who honour and celebrate this territory.